Injuries occur when a tissue’s (e.g. muscle, bone, ligament) strength can’t handle the load being applied (i.e. demands exceed capacity). This relationship is influenced in large part by the movement patterns being used by the performer. This post provides a brief summary of the 2015 study conducted by Frost DM, Beach TAC, Crosby I, and McGill SM. Firefighter injuries are not just a fireground problem. Work 52(4): 835-842, 2015. The injuries sustained by firefighters from a large Canadian metropolitan department over a five-year span were categorized by job duty, injury type and movement pattern. Describing injuries in this way may offer insight towards the development of injury prevention initiatives for any physically demanding occupation.

Firefighters are commonly exposed to extreme environments that challenge their ability to perform safely. Over the past several years, tremendous efforts have made to reduce the incidence of fires and fireground injuries; however, there has also been a rise in the number of injuries sustained while attending to non-fire emergencies and engaging in exercise and physical training. To better understand this injury problem so that an appropriate prevention strategy can be developed we need more information about the injuries that are being sustained. At present, it would be challenging to create an intervention to prevent “leg” injuries that occur while “training”, or “trunk” injuries caused by “overexertion”. Linking injury reporting to firefighters’ movement patterns may provide insight into the postures and motions that are contributing to the injury problem, regardless of the occupational activity being performed.

This study examined the injuries sustained by the Calgary Fire Department (CFD) between 2007 and 2011. In 2011, the CFD consisted of 1363 uniformed personnel operating out of 37 stations. Members responded 100,695 times to 50,520 incidents, the most common being medical emergencies (46%), false alarms (17%), hazardous conditions (16%), investigations (9%), and public service assistance (7%). Only 4% of all dispatches involved fire suppression activities. All included injuries resulted in medical treatment, restricted work duties or lost time. Injuries were described by type (i.e. sprain/strain, cut, etc.), body part affected, job duty, and the general motion pattern employed at the time of injury, which included: 1) bending, lifting and squatting; 2) jumping and landing; 3) lunging and stepping; 4) running; 5) pushing and pulling; and 6) sitting. 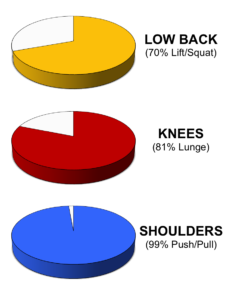 Over the 5-year span, 1311 injuries were reported, of which 64% were sprains and strains. The most common were those affecting the back (32%), knees (17%), ankles (15%) and shoulders (13%). Categorized by job duty, 33-45% of all back, knee, ankle and shoulder injuries occurred at the fire station, while 27% were attributed to exercise and training. Only 15% of all sprains and strains were sustained while attending to fires.

Irrespective of job duty, 70% of all back injuries were related to lifting, bending and squatting, 81% of all knee injuries were associated with lunging and stepping, and 99% of all shoulder injuries were attributed to pushing and pulling.

1. Firefighter injuries are not just a fireground problem

Only 14% of all injuries were sustained during fireground operations. While differences in the on-duty responsibilities, community demographics, and climate of the participating department may have influenced the findings, they are consistent with those reported in the past few years from fire departments across the United States. Over the 5 years examined, the majority of injuries were sustained while attending to fire station-related responsibilities and participating in exercise or physical training. These findings may reflect the fact that there are fewer fires, and a greater emphasis is being placed on firefighter wellness and fitness (i.e. more time being active); however, it does not diminish the scope of the injury problem. Instead, it highlights the reason why specific information is needed to develop targeted injury prevention strategies for any workplace.

2. Categorizing injuries by movement pattern may improve our prevention efforts

Irrespective of job duty, the general movement pattern used at the time of injury was strongly associated with the type of injury sustained – 70% of all back injuries were lifting-related, 81% of all knee injuries were lunging-related, and 99% of all shoulder injuries were pushing- and pulling-related. This finding also highlights the fact that the associated job duty could not distinguish the types of injuries sustained, perhaps because firefighters lift the same way whether attending to a medical emergency, exercising in the gym or completing a station-related activity. However, it also for this reason that there may be merit in developing prevention strategies that focus on the (re-)training of general movements that are common to a variety of job tasks. In other words, an emphasis could be placed on changing firefighters’ movement habits in an exercise or training environment so that new patterns emerge while performing other relevant job- and life-related activities. All firefighter injuries will never be avoided, but documenting the associated movement patterns will help to reduce the risk of sustaining similar injuries in the future.

If it’s a priority, you’ll find a way to make

Physical activity is not a substitute for mental h

Treat every workout as an opportunity to learn som

What you choose to do for exercise is important.

Honoured to part of the working group that is shap

Cancer is the leading cause of line-of-duty deaths

Consistency is key to building new habits. But l

Send Us a Message!

Send us an email and we'll get back to you ASAP.